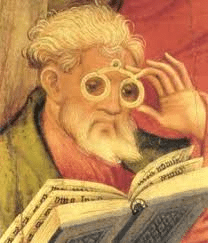 Today, we take the wide variety of eyeglass styles and their easy availability for granted but it wasn’t always so. In fact, it wasn’t until the end of the 1800’s that larger scale manufacturing started to become possible and there were fewer styles to choose from. Here’s a brief history of eyeglasses.

Reading stones were the first vision aid ever invented. It was created around 1000AD for far-sighted people. A reading stone was a glass sphere that acted something like a magnifying glass. It was put on top of writing to magnify the letters so they could be better seen.

Reading glasses first made their appearance between 1285 and 1289. The inventor of the earliest eyeglasses is unknown. These eyeglasses were worn by monks and scholars and held in front of the eyes or balanced on the nose.

Early eyeglasses were traditionally made out of quartz set into bone, metal or leather and initially created to help the elderly read. However, sidebars hadn’t yet been invented, so the glasses would always slip down the nose.

The Spanish tried fixing ribbons to the frames so they could be wrapped around the head but the idea proved unpopular and soon died out. Sidebars that rested over the ears were invented in the 1700’s.

Common eyeglass styles throughout history include:

The Development of Sunglasses

It is said that, in Ancient Rome, Emperor Nero would watch gladiator fights through polished gems. This is the first historical reference to sunglasses. In 12th century China, sunglasses were made out of flat panes of smoky quartz. They were used by judges to hide their expressions when questioning witnesses.

Coloured lenses were available early in spectacle manufacturing but Sir William Crookes of England created a lens capable of absorbing both ultraviolet and infrared light in 1913.

Sunglasses became popular for the first time in the 1930’s after further advances in their design was accomplished in order to meet the needs of pilots during World War II.

Contact your eye glass specialist to select the right eyeglasses for you.