Movies depict characters and personality types that people want to be like. Due to this, their appearance is extremely important. The way an actor carries himself or herself while playing a part helps you identify with the character. If you are to base your judgment of a role play by just one look, then you will look at different factors such as the clothing and the sense of style. Sunglasses play a large role in defining people, which is why it is so important to get the right pair of designer shades for the actors in the movies.

Movies provide for a massive platform on which many major brands advertise. This kind of advertising is very effective because people tend to want to appear like certain personalities, and so they dress up in similar fashions to the way the actors in movies do. When Daniel Craig wears a pair of Tom Ford sunglasses, the iconic James Bond comes to mind to anyone else who wears them as well. Will Smith in MIB wore a pair of Ray Ban Predators, and the sales of the particular brand shot up from 1.6 million dollars to 5 million dollars. That kind of hike is almost threefold.

Other iconic characters and actors, such as Tom Cruise, have been seen in a number of different designer sunglasses in various different movies. He has been seen sporting Oakley Romeos in Mission Impossible and Ray Ban Aviators in Top Gun. In this movie however, the color of the glasses remains unknown. Most people guess that it was a gold frame, green or gray-lensed pair of Aviators. In another movie, Risky Business, Tom cruise was seen in yet another pair; he was spotted in a pair of Wayfarers.

Rare Glasses that are Famous

Ray Ban came back into business with a bang in the 80’s. Tom Cruise’s appearances in such movies with these glasses were partly the cause of how well the company did that decade. Brad Pitt cannot be forgotten in his stunning performance in the movie Fight Club. The shades he wore were red Oliver Peoples. Though these glasses are extremely rare, they are very well known partly because of the movie. When people see designer sunglasses in movies, they tend to search for them in different stores so that they can purchase a pair of the same model. 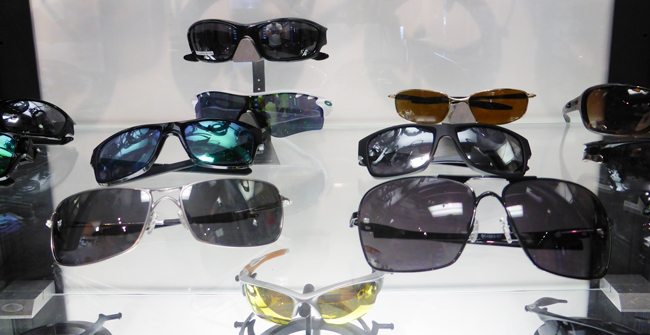